The Silence of the Trams

Many years ago, the ambassador of a nation whose vehicles drive on the opposite side of the road to those in Europe, looked left instead of right as he crossed Vienna's Ringstrasse and was, consequently, run over by a tram. As trams are almost silent, he had no idea that one was approaching. So that was the end of him.

That would be the conclusion you might reach if your assessment of risk was of the kind that seems to be animating governments worldwide in their approach to the new coronavirus and its ever-increasing number of variants.

My view is that that assessment is hysterical and far too extreme.  We have ruined existence for countless people with excessively harsh regulations, when we might have taken more moderate measures in the face of the real but limited danger the virus poses.

I acknowledge, with shame, that I didn't always think like this. At first I was crazed with panic, convinced that we all needed to be forced into our homes to cower for months and months on end, obeying our elected representatives' edicts and feeling outraged by those who didn't toe the line.

But my views have evolved as I've learned more about what the danger is that we are actually facing, and I have now changed my mind. I am not at the point where I think the virus doesn't exist - I know it does: I have friends and relatives who have suffered from it, some still unable to taste or smell some weeks or months afterwards. People in my neighbourhood have died. Despite these things, I no longer think the level of dismantlement of normal society that we continue to endure is justifiable.

I'm glad in a way that I was so mistaken to begin with, because realising what a twit I was has led me to think about risk. And I've realised that assessment of risk is also important in looking at another issue that is exercising many people nowadays in almost precisely the same way that I was exercised in the early days of the new coronavirus's appearance. That issue is variously called "climate change" or "global warming".

Once again, just as I don't deny that the new virus is very nasty at its worst, I also don't deny that the climate is changing or that the globe is warming. However, I do question whether the many measures being proposed by authority are the correct reaction to the degree of risk we face. As with lockdowns, I also wonder whether the various new prohibitions on all sorts of day-to-day things will be useful or effective, or whether they might cause unforeseen, wide-spread damage instead.

In thinking about how to approach these two issues - coronavirus and climate change/global warming - it strikes me that the risks they pose and the responses to them that we need to fashion actually run in parallel, (like tramlines, one might say, if keen to inject a vague sense of cohesion into a rambling blogpost). Climate change/global warming and the new coronavirus are each here to stay. In dealing with each of them, we have to first accept their presence, rather than fighting to eradicate them entirely, and then learn to adapt.

The whole long drama of the virus and the response by various authorities to it has made me understand finally the blindingly obvious: things are constantly changing and life sweeps us onwards, full of endless risk. As to trams and the cities where they operate, my policy is to always look both left and right.

“Brezhnev & Carter competed in a race & Soviet newspapers reported that Carter came in last but one, & Brezhnev came in second.”

But this morning when a friend sent me a joke about Gordon Brown & Peter Mandelson, I realised I was only partly right. This is the joke:

'Peter Mandelson & Gordon Brown were returning from the funeral of John Smith on Iona. They stopped at the Loch Fyne Fish Bar near Inveraray. The bar had a payphone & Mandelson asked Brown for 25p to put in the slot, as he had to phone a friend. Brown said "Here's 50p & you can phone them all."'

It turns out I like not merely old Soviet jokes, but the wider category labelled “Old jokes of all kinds”.

There is only one context in which the words "reach out" are acceptable; it is this:

In the summer, we spent ten days in Ireland, starting and ending with Dublin, where I went to the National Gallery of Ireland. I knew they had the extraordinary painting by Caravaggio, called The Taking of Christ. I saw it once at the National Gallery in London years ago and, along with his painting of the crown of thorns being forced onto Christ's head, which is in the Kunsthistorisches Museum in Vienna, it is my favourite of the paintings I've seen by Caravaggio.
I told myself not to take any pictures, because it is pointless, but in the end I did take some, trying to somehow capture and take away something of the way the picture portrays Christ and Judas Iscariot at the moment of betrayal: 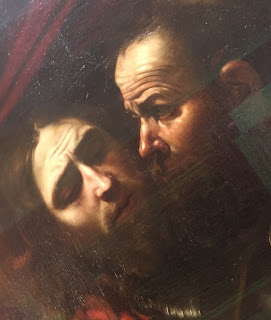 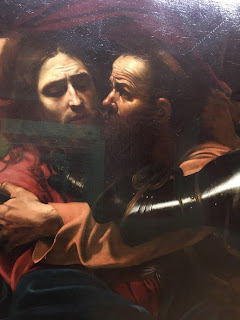 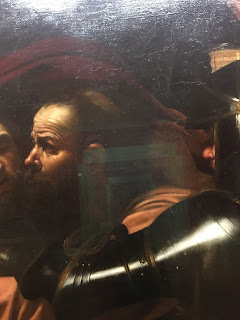 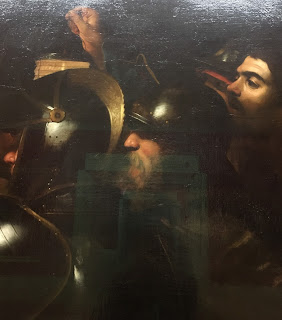 What I hadn't expected was how wonderful the rest of the collection is at the Dublin gallery. I will share some more of the pictures in future posts, but the painting that particularly struck me was this one, which is called Kitchen Maid with the Supper at Emmaus. It was painted in 1617-18 and the gallery claims it is Velasquez's earliest known work. 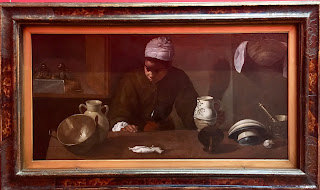 What I love most about this picture is its perspective. Its subject is the supper at Emmaus, but you only realise that after looking at it closely. Thus, you find yourself in the same position as the young maid who is the central figure - suddenly aware that something is present that you weren't aware of at first glance .
Here she is, in the midst of kitchen work, suddenly sensing something strange and startling nearby: 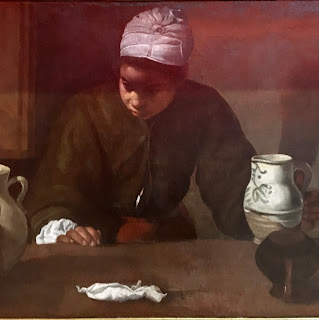 In the foreground, meticulously recorded in all their beautiful day-to-day reality, the things of the kitchen: 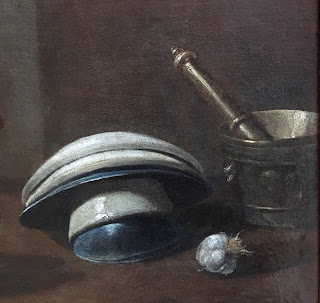 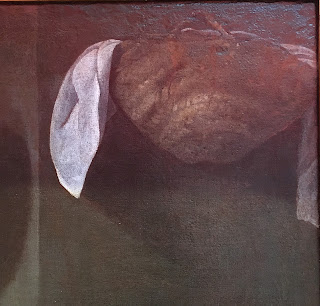 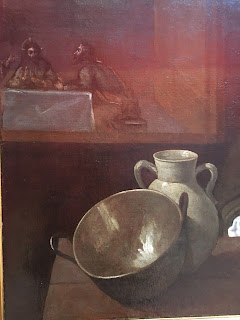 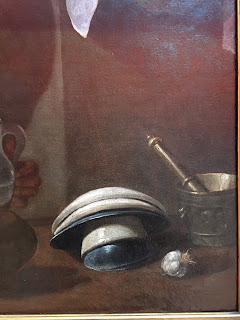 and behind them, sketched in without any attempt at sharp realism, the miraculous appearance of the resurrected Christ: 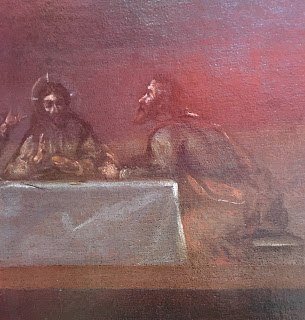 and the sweet, startled girl, like all of us, trying to make sense of it: 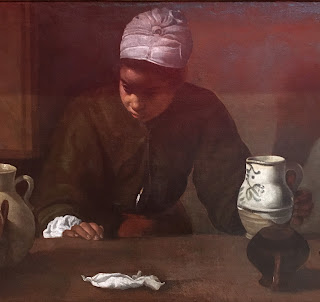 Whether he had any connection to Hergé's character of the same name - (Tintin's greatest friend, after Snowy) - no-one is certain, but there was, it turns out, a real Captain Haddock. Thundering typhoons. 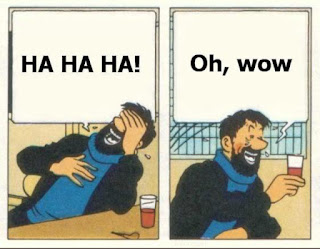 Someone posted the pictures to represent what they imagined Mary Shelley’s reaction would be to today’s claim by the New York Times that HG Wells and Jules Verne invented science fiction.
- November 20, 2021 No comments:

Rules for a Traditionalist Contemplating Contemporary Life: No. 3

Once upon a time we used to be told about movers and shakers. I didn't mind too much being told about them. There was something jolly and a bit silly about the image that was conjured up by the phrase, in my mind at least - 1960s chain link belts, bell bottoms and this very silly song:

Was there ever a sillier one?

"Movers and shakers" was aspirational. Any of us - or most of us anyway - can move, and, if called upon, perhaps with some embarrassment, we can even shake. Therefore, anyone who chose to could join the moving and shaking ranks, at any moment.

But movers and shakers have been replaced now, and we have A-listers in their stead. Ugh.

I've no idea how you become an A-lister. I don't know who puts the list together in the first place either. The people who write the back parts of newspapers, I'd imagine, since it is they who report on A-listers' prancing and preening. Stuck for something to fill their pages, hacks draw up lists of A-listers' favourite restaurants and holiday spots and foods and present them to us with fanfare. "Where A-Listers Like to Relax", "What A-Listers Are Wearing This Christmas", et cetera, et cetera. Never what their favourite lavatory paper is, mind you, because presumably A-listers don't need use lavatory paper.

Bring back movers and shakers! They were much more fun. Here are some movers and shakers from what is called "back in the day". The two on the left certainly seem to be having much more fun than any A-listers these days (and I think the picture undermines the idea that the much-reported demise of the suit and tie is doing men any favours): 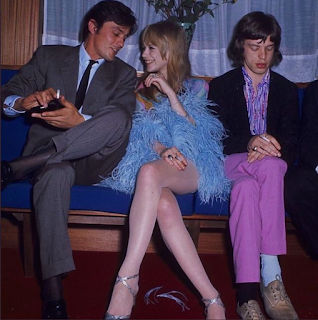 This afternoon, when I opened a recent copy of the London Review of Books, I was surprised and delighted to find a new poem by Hugo Williams. I have his collection called From the Dialysis Ward and I'd imagined, from a reading of it, that he was on death's door some years ago and by now must be dead.

But he isn't; he's still here, writing rather enchanting poems like this one (perhaps my favourite line is 'in an atmosphere of ice cream'): 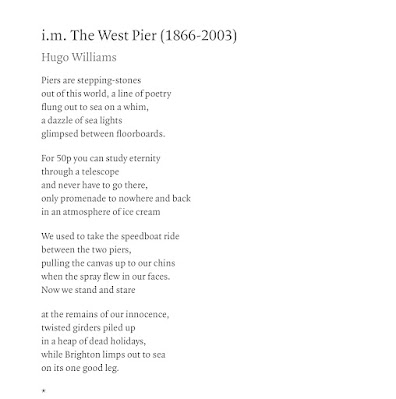 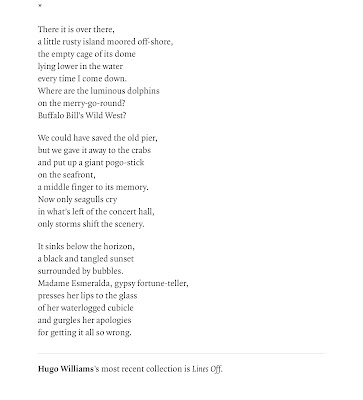