If Hungarian architecture is known for anything, it is

I remember a friend coming back from Moscow after

Ages ago, I mentioned my long hold-out against

Email ThisBlogThis!Share to TwitterShare to FacebookShare to Pinterest
Labels: Life

Years ago, some Serbian girls who'd

I saw this beautiful little film last night and was

Watching Q and A - which

I have to admit that while

Email ThisBlogThis!Share to TwitterShare to FacebookShare to Pinterest
Labels: Life

If you want an insight into

Not What It Was

This is a house in

Email ThisBlogThis!Share to TwitterShare to FacebookShare to Pinterest
Labels: Hungary

The Other Side of the Coin

Having praised buying local and fresh and seasonal and whatnot, I should point out that it does have its drawbacks. For example, I know a woman in Hungary who had the opportunity to escape from the country in 1956. However, she had other priorities. She would go, she decided, but first she had to help her mother finish bottling the tomatoes. And, of course, yes, you guessed it, by the time that task was finished, the opportunity had evaporated.

Similarly, living in Belgrade with a young baby when Chernobyl blew up, I walked in the door one Saturday morning and heard the telephone ringing (it's not so long ago and yet it feels like ancient history - not even a whisper of the possibility of almost universal mobiles at the time).

I picked up the receiver and heard my mother, who was calling from Australia. 'You ought to come home,' she told me. She was worried about any effect there might be on my daughter of possible leaking radiation.

I'd just got home from what was known as the peasants' market (when I was talking about life in Belgrade the other day to a friend in Canberra and mentioned 'the peasants' market', she said she was going to refer to the Canberra farmers' market [very bijou and full of failed interior designers producing 'artisanal' 'niche' products] as the peasants' market from now on) and there had been tomatoes there for the first time in eight months. To my eternal shame, my only thought was, 'I can't leave; I've got tomatoes at last.'

Here is the moustached man I mentioned yesterday, who has the greengrocers' round the corner (he's the one on the left, of course [or természetesen as the Hungarians would say]): 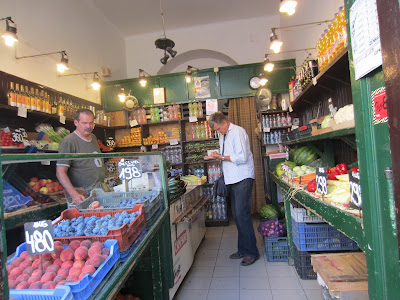 He doesn't look especially nice in the picture, but he has a delightful manner - gentle, almost courtly - as do the men who serve me in the market closest to my house (as opposed to the old ladies who have eyes only for the young man, my husband). He laughs at my jokes too, even when they're terrible (eg all the time: for instance, this morning he told me that something was called 'paszternak' [give or take one or two accents, the Hungarian word for parsnip, as it turns out], and I said I thought that was a Russian writer. Gales, simply gales of hilarity, my dear).

Actually, it's not so much the purchases that please me as that flimsy but regular connection you make with shopkeepers,  the meagre but frequent interchange that builds up somehow into a kind of indefinable relationship that isn't friendship but means you don't forget each other - or possibly it's a one-way street ie you don't forget them.

I remember, for example, Ted, who had a little vegetable shop - more of a cavern really - on the corner of our street in Chelsea when I was young - and so does Fiona McCarthy, who, in The Last Curtsey, wrote about him at surprising length, considering he was just a greengrocer and her book was supposed to be about the demise of the London season . Sadly, I don't suppose he remembers either of us at all. Worse still to contemplate is the probability that not only does he not remember us but he does not  remember anyone, because he's actually not here any more, but up in a spud-filled lair in some corner of heaven, charming the angels instead.

And even if Ted is still here, his shop certainly isn't - such places are all but gone in England, I fear. Maybe the place in Bishop's Waltham that my aunt used to take me to is still going  -there were labels stuck in all the different fruits and vegetables, showing their provenance and the resulting combination of 'Israel ', 'South Africa' and Spain' with 'Botley', struck me as gloriously bathetic - but  I suspect it has since been steamrollered by the kinds of ruthless operations that shattered poor Tom Good's dreams of surplus riches: