Words and Phrases, a Continuing Series

Listening to an episode of BBC Radio Three's Arts and Ideas that dealt with an exhibition of George Grosz's work, I was struck by the use of the phrase 'sex industry', in the context of the Weimar Berlin:


I think the phrase tries to make a pretty sordid set of situations sound organised and rational, as if somewhere all the time there'd been a CEO and a board, who'd worked out marketing strategies and presided over promotion rounds and appeal tribunals. It also seems to me to be priggish and euphemistic. The buying and selling of sexual favours is not a branch of the manufacturing sector, even if it does demand hard work from its participants
- October 26, 2013 2 comments:

In the book on Ockers that I mentioned the other day, Max Harris claims that ockerdom originated elsewhere but around the time he was writing (1974) it spread to Sydney, ruining what he describes as the 'Sydney style', which was 'a delicate balance between sparkling waters and a relaxed suburbia'. His explanation of what followed makes me laugh, particularly as one of those he describes as 'loutish pubescents' was probably my brother, then a fledgling reporter given to hurling 'questions at startled public figures' whenever they let him out with a microphone:

"It [Sydney] fell, alas, the easiest of victims to the hepatitic infection of ockerdom. The easy manners have converted to churlish assertiveness. The colourful Australian vernacular has become Strine stereotype. The instinctive egalitarianism has become ignorantly complacent dogmatism. The casual clothing now gives the impression of a ghastly cane-cutter's convention in a poor man's Florida. The media era, once characterised by the iconoclastic Australianism of a Michael Charlton and a Bob Raymond, is now characterised by loutish pubescents throwing embarrassingly inept questions at startled public figures - from Gough Whitlam to visiting pop stars and thespians. Gaucheries are good enough because a gauche public has come to expect the pleasures of uneducated impertinence."

It was probably also the era of Norman Gunston. I wonder if Mr Harris laughed at his antics:
(For some reason the you tube link doesn't seem to be embedding so here it is:
http://m.youtube.com/watch?v=u5jI0FSIXWE&desktop_uri=%2Fwatch%3Fv%3Du5jI0FSIXWE.
)

Silly Max Harris, if he didn't.  Taking pleasure in the absurd isn't the same thing as being a philistine. Solemnity isn't wisdom; at least I don't think it is.
- October 24, 2013 No comments:

When Melbourne Was Marvellous

I took my mother to a funeral in Victoria this week. The person who'd died had made a scrapbook of cuttings from the social pages of Melbourne newspapers - yes, they actually had such things, slavish with adoration of Clyde girls and people from the Western District - from the days when she and my mother were young.

Flicking through the book, my mother said it was like walking among ghosts. To me, it was like being allowed inside the walls of Blandings Castle. If the dates didn't give the lie to the theory, I'd argue, based on the evidence of what I saw in that scrapbook, that Wodehouse never wrote fiction at all. Rather than using his imagination, my theory would go that he based everything he wrote on his experiences during a hitherto unrecorded trip to pre-war Melbourne.

There he discovered the prototypes for his ranks of formidable aunts: 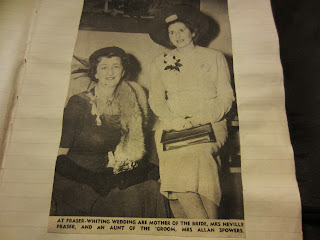 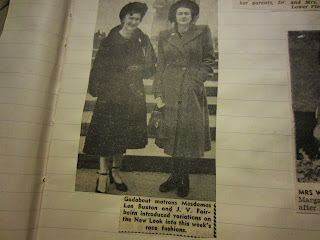 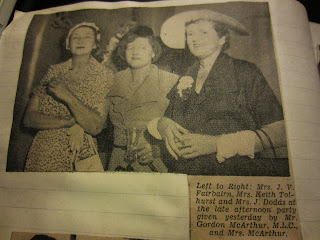 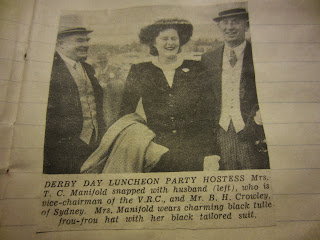 as well as templates for the legions of terrifying eligible girls, waiting to ensnare young Bertie Wooster and those of his ilk: 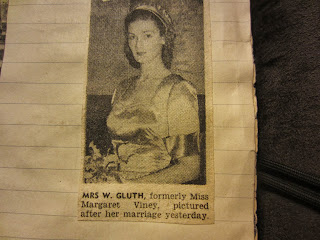 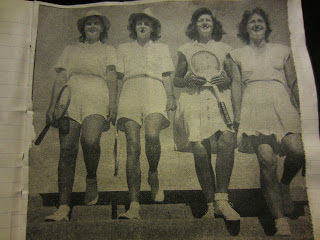 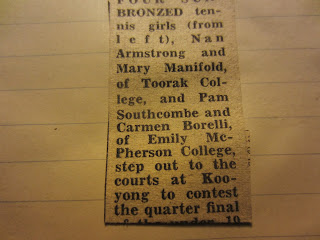 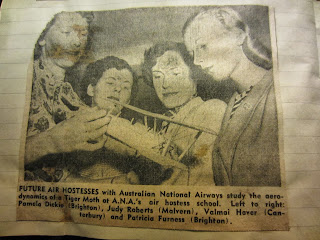 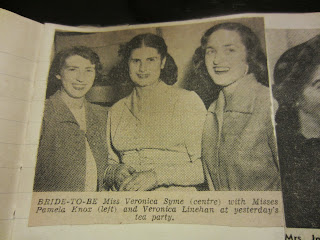 While sheep were the farm animal of choice in Victoria, it wouldn't have been a great leap for Wodehouse to convert that Victorian obsession into the reverence shown for pigs by some of the inhabitants at Blandings: 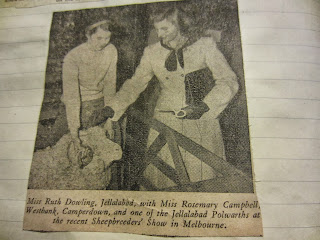 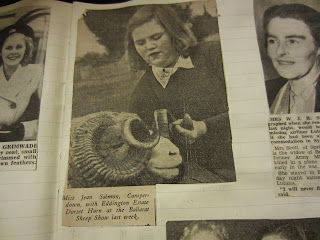 As for Woosterish types, Melbourne was simply teeming with them, my dear fellow: 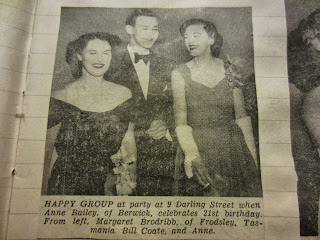 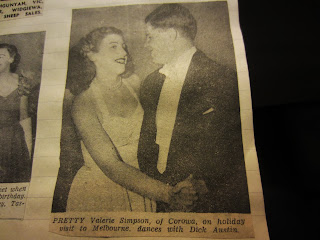 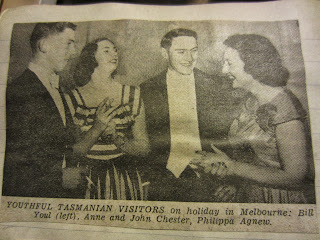 Mind you, I also found evidence for the existence of a real Barry McKenzie (who else could that possibly be on the left?) 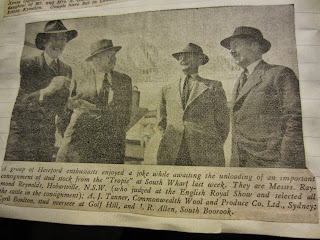 My thoughts on the topic of Wodehousian and Humphriesesque inspiration were interrupted at this point by an exclamation from my mother.

'Oh look, there's Tighty Fogarty - he was such a good dancer,' she cried.

'Why was he called Tighty?' I asked, peering at the picture she was pointing at.

'Oh darling, you know, he was rather fond of a drink', she said. 'But you've no idea how marvellous it was when you found a good dancer.'

She stared at Tighty for another long moment.

'Mind you', she added, 'the night he got so tight he ate the flowers from the vase on the table, I did wonder whether he wasn't perhaps taking things a little too far.' 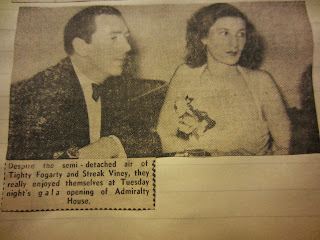 (History doesn't relate whether Tighty's friend Streak was unusually fond of bacon or of taking her clothes off in public, let alone what the hell is going on in this photograph:) 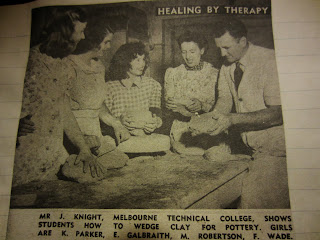 Words and Phrases, a Continuing Series

The redoubtable @boeufblogginon has reminded me of another horrible modern phrase: "talk to the hand". Where did it come from, what does it mean and why does it make me almost as annoyed as the sound of plastic bags being rustled, (particularly in cinemas)?
- October 13, 2013 6 comments:

After yesterday's post about Max Harris and his many complaints about creeping decadence etcetera, I listened to an episode of John Finnemore's "Souvenir Programme" from BBC Radio 4. This sketch from the programme, which makes fun of the passion for making things 'relevant' for today's schoolchildren, would probably drive Max Harris into a new frenzy:

In 1974, Maximus Books published a collection of essays written by Max Harris. It was called "Ockers: Essays on the Bad Old New Australia", and it gives the impression of having been written one Saturday afternoon after Harris had built up a considerable head of exasperated steam about what he describes as "idiot egalitarianism".

In the book, Harris rages against philistinism in Australia. I suppose the furious tone of his prose is not altogether surprising; that is, everything he wrote after 1943 probably needs to be viewed through the filter of his experience with Ern Malley, which, I suspect, left him ever afterwards feeling a little wounded - and what, after all, is anger, if not an expression of hurt?

Anyway, the thesis Harris puts forward in Ockers is this: Gough Whitlam and his government; Paul Hogan; Barry Humphries; Philip Adams; and one or two others caused "a backward shift to uneducated attitudes" in Australia and the "resurgence of that ill-educated, dogmatic, incoherent and arrogant psychological phenomenon - the Australian ocker". One of my uncles used to occasionally exclaim with feeling, "The trouble with this country is the buggers won't work"; Harris's argument struck me as being on just about exactly that level of sophistication.

All the same, when I came across this paragraph, it resonated with me, perhaps because I was sent to a Froebel school as a child and longed instead to be at the nearby Lycee, where they had homework and were challenged and seemed to be gaining an enviable competence in a number of areas, whereas the only thing I was becoming highly skilled at, (apart from music and movement), was papier mache modelling, (mind you, we did once make a half lifesize dapple-grey horse):

"The theory of progressivist education has been that learning occurs through exploiting hedonistic impulses in the young. That is, targets, tests, examinations, homework, compulsory and coercive acquisition of skills like spelling, handwriting, simple arithmetic, etc. are bad. They symbolise education as an oppressive and authoritarian process. No doubt. But the opposite philosophy leaves young adults with a firm conviction that life can be shambled through as a non-stop dedication to aimless hedonism."

My grate Twitter friend @deniswright launched his first commonplace posting on an unsuspecting world yesterday. Inspired by his example, I grabbed the small book in which I occasionally write down quotations I like from things I'm reading or listening to and decided I would follow in his wake.

Here are the first few quotations in my book, reflecting mainly the fact that, when I began, I appear to have been mostly reading Our Mutual Friend, (which I loved):

"...no rent in the leaden canopy of its sky".
Charles Dickens, Our Mutual Friend

"A grey dirty withered evening in London city has not a hopeful aspect. The closed warehouses and offices have an air of death about them and the national dread of colour has an air of mourning."
Charles Dickens, Our Mutual Friend

"Boots and Brewer flutter like moths around that yellow wax candle - guttering down and with some hint of a winding sheet in it - Lady Tippins."
Charles Dickens, Our Mutual Friend

"What did they, the Americans, really know about such parts of the world, the layer upon layer of savagery that made them up?"
Nadeem Aslam, The Wasted Vigil, (which is set in Afghanistan [and which has a particularly fine cover for its Indian edition])

"We live the present blindfolded and really see only with hindsight."
Man I heard on the radio, writing to his son, who had committed suicide.

"the quiet outpouring of refined details."
John Updike pinpointing what he finds attractive about living in an old house.

"The incompetent servant, by whomsoever employed, is always against his employer."
Charels Dickens, Our Mutual Friend

"Mr Boffin's acquaintance with the names and situations of foreign lands being limited in extent and somewhat confused in quality, he shaped his next question on an elastic model."
Charles Dickens, Our Mutual Friend (I know I wrote this one down because it exactly reflects my predicament re geog.)

"The inevitable self-consciousness which waylays a man, as soon as he has been freed from some bonds, whether ethical or economical."
John Betjeman, Ghastly Good Taste

"The difference between loving men as a result of first loving God, and learning to love God through a growing love of men, may not at first sight appear profound."
John Betjeman, Ghastly Good Taste

Lippi and Donatello, "both composed uncanny but completely composed worlds behind their protagonists."
Michael Baxandall, Painting and Experience in 15th Century Italy

"It is very difficult to get a notion of what it was to be a person of a certain kind at a certain time and place ... It is here that pictorial style is helpful."
Michael Baxandall, Painting and Experience in 15th Century Italy

"Liquid ... is fanatically committed to leakage and loss"
Roger-Pol Droit How Are Things

"Mmm, very nice."
Woman at Tate Modern, turning away from Lyubov Sergeyevna Popova's "Model for the Capitalist Fortress for the Mass Spectacle of the Struggle and Victory of the Soviets"

Beware, this is just the beginning; I have many, many more.