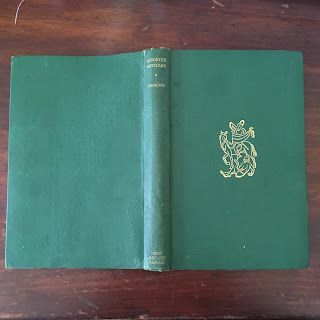 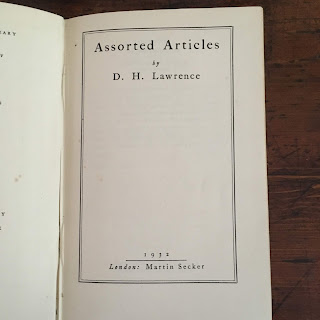 I cannot say DH Lawrence is complete rubbish, because I found The Rainbow and Women in Love striking and intriguing when I read them many years ago - and still remember them as remarkable and unlike anything I'd encountered before, as well as far from amateur. They are each an achievement of some kind, possibly masterpieces, although flawed ones. Kangaroo is also much admired, and I vaguely remember reading White Peacock, which once again was more than competent and certainly full of intensity, (and yes, I know what Yeats said about that).

I think now that the flaws that undoubtedly exist in DH Lawrence's fiction arise from a lack of clarity and rationality in his thought. I came to this conclusion after reading a book called Assorted Articles by DH Lawrence. Sadly, Lawrence's lack of clear thinking becomes horribly obvious when he tries his hand at the essay form. In fact, the result is almost total drivel. Reading this book has been one of my less happy experiences. I picked it up in a secondhand bookshop a while back and I have to admit that I have been regretting it ever since.

I cannot say that I wasn't warned though; I only had to look at the table of contents to see what I was getting myself into, as the titles of the pieces included in the collection provide a pretty good flavour of the book's overall tone:

Do Women Change?
Master in his Own House
Matriarchy
Is England Still a Man's Country?
On Being a Man
Sex versus Loveliness

Essentially, for large chunks of the book I felt as if I were in a crowded pub being bellowed at by a man who hates his opposite sex.

"The real trouble about women..." is the opening sally with which Lawrence begins one essay.

"Women are just part of the human show ... they were never anything but women, and they are nothing but women today, whatever they may think of themselves ... Women are women", he insists in another piece, (is it not breathtaking that anyone paid him to write this stuff - and actually published it? At least Alf Garnett was satire).

"When women start coming to the point, they don't hesitate", Lawrence ventures next, "They pick a daisy, and they say: There must be a point to this daisy, and I'm going to get at it. So they start pulling off the white petals, till there are none left. Then they pull away the yellow bits of the centre, and come to a mere green part, still without having come to the point. Then in disgust they tear the green base of the flower across, and say: I call that a fool flower. It had no point to it!"

As Lawrence points out:

"Women didn't make England. And women don't run England today, in spite of the fact that nine-tenths of the voices on the telephone are female voices. Women today, wherever they are, show up; and they pipe up. They are heard and they are seen. No denying it. And it seems to get on the men's nerves. Quite! But that doesn't prove that the women own England and run England. They don't. They occupy, on the whole rather inferior jobs, which they embellish with flowered voile and artificial silk stockings and a number of airs and graces, and they are apt to be a drain on a man's cigarettes."

I think Lawrence may think he is being humorous. Comedy is so often oddly limited to its own time.

But in the last passage I quote above there is something interesting, I think. It seems to me that in it a faint trace of verve is detectable, when Lawrence touches on the subject of clothing. Once again my suspicion that his real vocation was as a dress designer raises its eau-de-nil crepe de chine head.

And more evidence to support my theory appears when we come to an essay called Red Trousers, (yes, really). In it, Lawrence addresses the problem of "dullness", which he claims someone has suggested in a letter to him is caused by smoking. Lawrence, after several paragraphs of hollering moronically in the manner of the above quotations, suddenly comes alive when he decides that the problem of dullness can be counteracted by deciding to wear bright clothing. And, with the arrival of the topic of clothing, just as in Women in Love when he got going on the Brangwen sisters' stockings, et cetera, Lawrence's writing transforms, becoming relatively vivid and, if not exactly witty, at least not that of a Speakers' Corner bore:

"In the really great periods like the Renaissance ... the young men swaggered down the street with one leg bright red, one leg bright yellow, doublet of puce velvet and yellow feather in silk cap. Now that is the line to take. Start with externals and proceed to internals ... If a dozen men would stroll down the Strand and Piccadilly tomorrow, wearing tight scarlet trousers fitting the leg, gay little orange-brown jackets and bright green hats, then the revolution against dullness, which we need so much, would have begun."

In this article by Julian Barnes, about how he came to love EM Forster, I found this vivid description by Forster of a rather horrid meal:

‘“Porridge or prunes, sir?” That cry still rings in my memory. It is an epitome – not, indeed, of English food, but of the forces that drag it into the dirt. It voices the true spirit of gastronomic joylessness. Porridge fills the Englishman up, prunes clear him out, so their functions are opposed. But their spirit is the same: they eschew pleasure and consider delicacy immoral ... Everything was grey. The porridge was in grey lumps, the prunes swam in grey sauce ... Then I had a haddock. It was covered in a sort of hard, yellow oilskin, as if it had been in a lifeboat, and its inside gushed salt water when pricked. Sausages and bacon followed this disgusting fish. They, too, had been up all night. Toast like steel: marmalade a scented jelly. I paid the bill dumbly, wondering again why some things have to be. They have to be because this is England, and we are English.’
- September 04, 2019 4 comments:

There has been a bit of back and forth on Twitter of late about horrible modern usages in English. It is an inexhaustible topic, even if, like me, you are quite open minded and think that the English language's great advantage is that it is changeable. Thus, while I mourn the loss of the original meaning of "disinterested", I recognise that it is now used interchangeably with "uninterested" and that this is an example of the language's splendid adaptive powers (although I do still wonder how the original meaning will be expressed - whether a new word will replace "disinterested" or whether we just won't be disinterested any more).

While my husband, only recently released from Brussels bureaucratic servitude and therefore a little post-traumatic linguistically, launched himself at the topic with the energy of a butterfly bursting out of its dry and papery chrysalis, and Lord Steerforth - late of this parish of blog, but recently gone over almost entirely to the Instagram/Twitter dark side - cast in his two bob's worth, I hesitated, unable to decide which of the many newly-minted cliches I hated the most.

I've always found such questions extremely difficult, which was frustrating for my children when they went through that phase all children do of asking their parents, "Which is your favourite food/book/music/country et cetera et cetera". My answer was always, "Hmm, I don't know".

Anyway, this morning I was reading The Times online edition and at last it came to me - the phrase that at present I hate more than any other is this one, used often by the Australian Broadcasting Corporation and now, I realise, also in the British press:

I think my main aversion is to the use of the word "conversation". Whatever it is that you are being enticed into - in the case of the ABC, I think you are supposed to tweet madly in the hope that one of your tweets might run along the bottom of the screen during a current affairs programme; in the case of The Times, I suspect you type in your opinions and some fiendish machine somewhere uses what you say and how you say it to target advertisements at you with greater precision - it is not a conversation.  And as for joining, what is it you are joining? A databank? A competition? A black hole?

All of the above, I suspect, which means the phrase should really read not "Join the conversation", but "Join the con."
- September 01, 2019 No comments: