I feel drained today because I stayed up late with Dracula. Serves me right, wasting my time with a potboiler, some might say. Except that the book is not just a potboiler - and to the extent that it is one at all, it is a very good one - and, I suspect, innovative in its time.

But, as I say, the book is not merely a page turner. In fact,  having read it, I at last understand its ubiquitous appeal: the reason that it is so regularly referred to and parodied and updated - the beauty of the whole Bram Stoker tale, (and by the way it is Stoker's birthday) - is that it can become so easily a metaphor for other things.

In my case, I have become convinced that, if I could spend long enough - and, drained as I am, I haven't the energy just now - I could construct a superb and complex argument to the effect that Stoker's book can be taken as a metaphor for Brexit.

After all, if you look at a map that shows the territories of all the EU's member states, the geographic capital of the European Union ought really to be Budapest. Budapest is closer than any other city to the central point of the territories of all European Union members (or at least, in my geographically dyslexic way, that is how the map looks to me.) And, remembering that there is a deep belief held by many Hungarians that Transylvania is part of Hungary and taking into account that Dracula hails from Transylvania, one can take it that Dracula is the European Union and his lair in Transylvania is Brussels.

Therefore, Dracula's invasion of the British Isles and attempt to bleed England dry can definitely be taken as an allegory for current events.

Except that in Stoker's book the brave English prevail and not only drive Dracula out but manage to destroy him. Sadly, the British state is too deeply compromised to achieve such an outcome, I fear. If you want to know why I think that, have a look at this picture of the current Prime Minister of Great Britain. Poor woman, I'm sorry she has been overcome by the horrid Count, just like poor Lucy and - almost - poor Mina. However, it is clear when you look at her, that all is hopelessly lost: 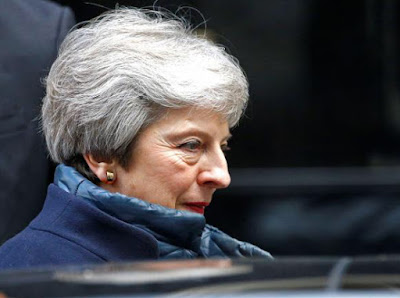 If you haven't read the book, I recommend it. The beginning is a little slow and the last section is so exciting that you have to read feverishly, possibly slightly sliding over the paragraphs in a hasty rather than a careful manner. If you are in the market for a potboiler with perpetual relevance, Dracula is a remarkably good one and resonates marvellously down the years.

PS I wonder if Van Helsing in Stoker's Dracula was a forerunner for Agatha Christie's Hercule Poirot - his patterns of speech are very similar e.g. "While you, friend Jonathan, go in your so swift little steamboat".