Words and Phrases that Baffle Me

There's been quite a bit in the papers lately about a new activity called 'planking', which involves people having themselves photographed while lying face down on things - or sometimes (and it is this that has aroused the media's interest) having themselves photographed as they attempt to lie face down on something, but instead falling off and dying (tragic, yes, but idiotic also).

This in itself is baffling (why are they doing this, when they could be reading Proust in the original, you may ask; certainly, that is the question that poses itself to me constantly as I trudge my way through the modern world.) Anyway, even more baffling, as far as I'm concerned, was the statement made by an expert in the world of 'planking' when he spoke on the radio yesterday morning. This is what he said, when the interviewer asked him whether it was possible to just plank or whether having the picture taken and then uploaded onto Facebook was also vital to the activity: 'Well, the thing you have to understand is that planking is all about mediating the self.'

'Mediating the self' - what does it mean? I have no idea.

Never mind - at least the people writing letters to the Australian seem to be getting some pleasure from the phenomenon: 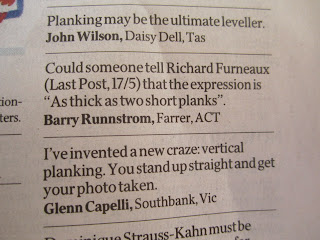