It's in the Name

One of the papers - possibly the Australian - has a column where they interview a new person each week. The people they interview are selected on the grounds that they have an unusual job. The other day the turn came for a stamp designer for Australia Post.

She told the paper that she was busy producing 'three secular Christmas stamps'. There was a picture of them. They showed a wrapped present, a Christmas tree, (looking a lot classier than any we've ever managed in this household), and some kind of bauble for hanging on a tree.

The designer explained, 'We have to be mindful that not everybody will like the one definition of Christmas.' 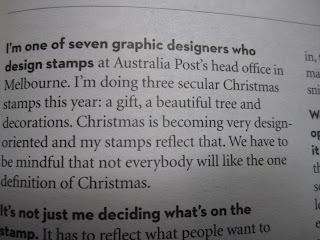 So, although we are all being given a holiday as a result of a religious festival, we should avoid mentioning the religious element, it seems.

I don't think you have to be a wild-eyed Bible-basher to object to this. While I would never argue that anyone should have to go to church or pray or pretend they believe in Christianity, I think it is basic good manners to acknowledge the underlying reason that we are celebrating Christmas. We may well have got the date wrong, but everything we are doing - getting time off, giving presents, putting up trees - is done as a way of celebrating the birth of Christ. That's why it's called Christmas - the clue is there, in the first syllable of the holiday's name.

So who exactly does Australia Post think will not like this definition of Christmas. Who do they imagine is going to storm out of the post office, when offered stamps showing a manger and three wise men? If they are worried about giving offence to people of other faiths, I think this letter demonstrates that that is a silly and pointless effort: 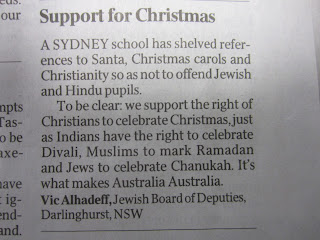