In Praise of Censorship

As I was bicycling back to Canberra's pathetic attempt at a Chinatown, (when I went there the other day, I couldn't get what I wanted as the markets in Cabramatta had been closed for Chinese New Year and so supplies were delayed - boring explanation, but I wouldn't want anyone thinking I'm easing off on my attitude of haughty contempt towards the place and becoming a fan who can't keep away), I noticed this in the gutter: 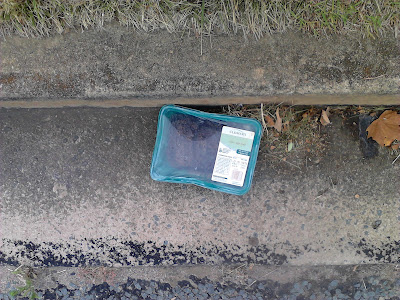 For those who can't zoom in and see the detail, it is a pristine packet of Cleaver's 'Healthy Organic' beef mince, priced at a healthy - one might even say hefty - $8.74.

My initial reaction was to think, 'Oh, some poor person has ridden home from the shop, imagining they have a lovely mince-based meal ahead of them, (if it's possible to have a lovely mince-based meal, which is debatable), and then they've got home and found that somehow - oh dear, could it be the onset of ... no, don't even tempt fate by mentioning it - although they thought they went to the shop and bought the stuff, it turns out they only imagined doing so, in which case what precisely did they do during the past forty-five minutes, (and what's the betting that that leads to a quick slug from the vodka bottle and from there it's all downhill?)'

And then I thought, 'But, no, wait a minute, what if, in fact, that organic mince has been put there deliberately to trick us into thinking that, but really a maniac has taken an incredibly fine needled syringe, which can penetrate the plastic covering while leaving it apparently unperforated, and - in the hope that a passer-by might pick up the packet, thinking, "Oh, jolly good, here's a free meal someone's dropped", and take it home, cook it and die - has injected into the so-called 'healthy organic' mince a terrible toxin that will kill in minutes.'

And then I thought, 'Hang on, where did that incredibly mad idea come from?'

And then I thought, 'It came from having all sorts of idiotic so-called news stories, about maniacs injecting food in supermarkets and stuffing jars of baby foods with ground glass et cetera, shoved at me by the media over the decades, so that now I can actually imagine that there are people out there who might possibly be nuts enough to do weird things that I previously could not have come near imagining.'

And then I thought, 'How utterly useless it is to know that kind of thing, how unnecessary it is to be told such stories, how irresponsible it is of news services to provide information about things that are so rare and aberrant that they are never ever likely to affect most people and yet once most people are given information about them they will never be able to get rid of that information or the possibility that such things could happen. Their minds will be cluttered up with lunatics lurking with poison and grisly details about murderers who boiled up their victims or kept them in bits in office fridges or buried them under the paving of people they were working for, things that offer no enlightenment but merely terrify and leach away trust between human beings. Furthermore, having been introduced to the knowledge that certain individual human beings can behave in extraordinary and terrible ways, they inevitably are forced - by virtue of being robbed of their innocence, of no longer not knowing that such things are possible - infinitesimally closer to being able to actually commit such acts themselves, because they have gone beyond the initial utter shock and reached the point of acceptance that such things occur.'

And then I thought, 'Do newspapers and reporters ever ask themselves what good it actually does, when they decide to tell us many of the things that they do decide to tell us, usually without ever being asked to tell us?' Do they wonder to themselves about what exact important purpose is served by providing us with all the prurient details of individual  acts of gory madness?'

(On a separate note, I also think it's unforgiveable to insist people watch horrible things, just because you either like them or, more likely, want to spread around the trauma [and don't get me started on the night my friend went to see Peter Greenaway's The Cook, the Thief, his Wife and her Lover and I said I wouldn't go because it looked too revolting and then he came home in a state of utter traumatised shock and insisted on cornering me and describing every scene in minute detail, thus ridding himself of his own horror and passing it straight on to me {I think what he did's called the talking cure, except that usually people pay - and did that really happen with the ... no, actually I really don't want or need to know}]. And, by the way, the mince is still there - in the gutter on Cowper Street, just after the intersection with Macarthur Avenue, should anyone be in the market for a free feed - although you might want to check the use-by date [and the possibly perforated cellophaned]).
- January 28, 2012