I watched the BBC television news this evening. The bulletin was one long panic-stoking tearjerk about the desperate efforts of hospital workers to keep people with severe COVID-19 alive, (the BBC has been whipping itself into an ever greater fervour lately, using techniques from the Fergal Keane school of over-emotional journalism, and even wheeling out the man himself on one occasion to get us wringing our handkerchieves with anguish and grief).

I don't know why but I have been always been actively resistant to emotional manipulation, so this stuff doesn't work for me. My perspective, as I have mentioned too many times, is this: we have an exceptionally catching virus in our midst, it kills some people in a very nasty way, and medical staff are having their work cut out looking after people who catch it - but, on the other hand, flu has completely vanished this year, make of that what you will. To stop the spread of the current virus, people are being prevented from leading their lives as they would normally. They are lonely, they are being dragged into poverty, they are dying from other, now neglected, medical disorders, their children are not being educated or allowed to see each other every day. Additionally, some 250,000 businesses in the United Kingdom are predicted to go bust in the near future. But COVID-19 and how the NHS is coping is the only thing that matters for the UK government. And, as far as the BBC News team is concerned, it is the only story.

Perhaps to thank the public for its compelled efforts, tonight, at the end of the BBC's usual coronavirus-fest of misery, we were given what I'm sure was intended as a feel-good story. To cheer us up, we were shown joy breaking out in a care home where the workers are celebrating the 105th birthday of a woman who has dementia and has just recovered from the current COVID virus.

To me this was the worst moment of the entire bulletin. I wasn’t cheered up at all. In fact I was appalled. It seemed to me that this story encapsulated a growing and utterly crazy cult that has developed during the pandemic. It is a cult in which we seem to believe that the greatest goal of life is to try to all cheat death forever. It is a cult where we celebrate those who survive and keep breathing, ancient and decrepit, panting and staggering and barely able to see, hear or think. It is as if we are all part of some vast and utterly pointless competition in which he or she who lives longest is the winner. It doesn't matter how little of the essence that makes the winner an individual remains within them. It doesn't matter if they can understand what's going on around them. It doesn't matter if they are incontinent. It doesn't matter if they can read a paper or hold a conversation. All they need to do is to maintain a beating heart.

I thought I might be alone in my bafflement but, when a friend sent me this by a cartoonist called Nick Newman, published in the Spectator, I realised that there are others thinking on at least similar lines: 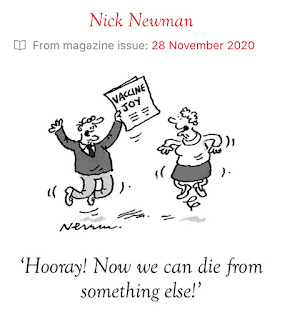