For me the old spa towns of Europe feel a little like portals back into the time just before the First World War broke out - if only I could work out how to use them, it might be possible to return to early July 1914 and perhaps connect to an alternative strand of time in which the disastrous conflict that occurred in our own part of the multiverse never happened at all. While Baden-Baden is not quite as evocative as Karlsbad or Marienbad in this respect, it certainly has a melancholic air of having been slightly forgotten, after being at the centre of much attention.

In its hey-day Baden Baden was much loved by Dostoevsky and Tolstoy and Turgenev. There is even a bust of the latter: 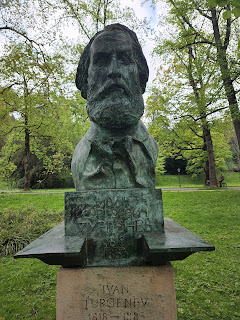 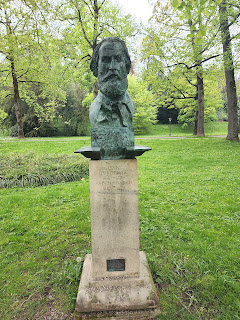 The bust was given to Baden Baden by the cultural ministry of the Russian federation in 2000. By rights I suppose we ought to have made an attempt to pull it down or cover it in eggs or paint, since the Russian federation has now proved itself a very bad thing and the current practice is to tear down all statues of persons in any way associated with bad things.
But we didn't, shame on us. And there is no point in me writing about Turgenev for my statue blog, since he is not an obscure figure who needs me to tell anyone who he is. The one thing you may not know about him though is that he loved Baden Baden and wrote to Flaubert in a fit of enthusiasm, suggesting he visit as soon as he possibly could, because the Baden Baden trees were so nice.
The Baden Baden trees are still magnificent.
But, to get to the point of this blogpost, not far from Turgenev stands a much older monument to a person who was once of great prominence but is now, I suspect, a great deal less well known than Mr T. Here it is: 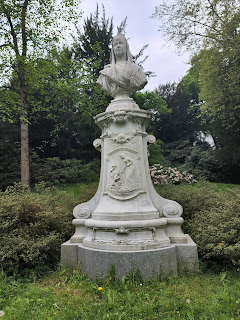 If you wish to find out more about who the monument is dedicated to, you can by clicking here.