Is There a Sub Text?

The Telegraph reader looks up at the female-identifier, his eyes full of puzzlement. "She says Boris Johnson is going to extend gay rights further. What can that mean?" he asks.

"Is he going to make it compulsory?"

We’re talking about a speech at the 2021 conference of the British party that calls itself Conservative. Clearly, we aren’t alone in taking the word conservative at face value. All across Great Britain there are conservative voters scratching their heads along with us, unaware of the intricacies of textual interpretation, understanding nothing of the joy of discovering sub-texts, unaware that these days language is as much a plaything as it was for Alice's Humpty Dumpty,(1.), with dictionary meanings unmoored from their one-time words.

(1.) 'When I use a word,' Humpty Dumpty said, in rather a scornful tone, 'it means just what I choose it to mean — neither more nor less.'

'The question is,' said Alice, 'whether you can make words mean so many different things.'

'The question is,' said Humpty Dumpty, 'which is to be master — that's all.' 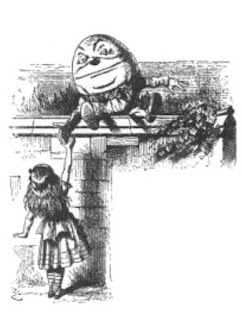