As a child, my dream was to find my way through the back of a wardrobe or to travel via a time warp to some point in the distant past. I loved the idea of magic - and half magic, as described by the wonderful American Edward Eager, inspired by E Nesbit. I still find the idea of continuity with the past or a link with the people who have gone before very appealing. It is probably the thing that makes me slightly more attached to the British Isles than to Australia, although I was born a citizen of both countries, (once, Australia tipped the balance in its own favour by appearing to be so much better governed than Britain but sadly the current panic - sorry, pandemic - has revealed that to have been an illusion.)
Anyway, as we grow older it is difficult to retain a sense of magic and of the past being all about us. But sometimes still that feeling can be recaptured. For me, it happened when I stepped inside the parish church of St Just in Cornwall. The interior of that place is quiet and shadowy and resonant in a beautifully melancholy way. 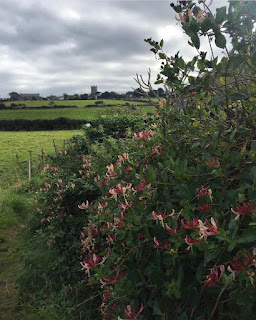 There it is, on the crest of the hill - the sight of a church tower rising from the landscape is always for me one of the joys of Britain. 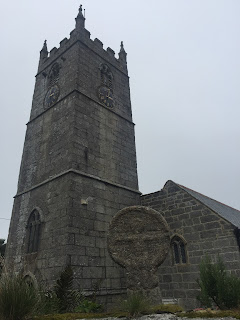 Here it is, at close quarters, the stone in front of it, I would guess, dating from centuries earlier than the buildings that stand there now. 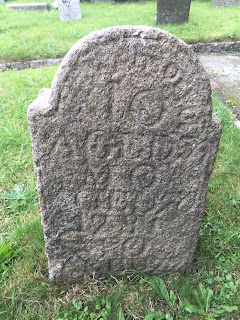 This tomb stone also appears ancient, although I cannot make out what is written upon it - can that be the year 1281? 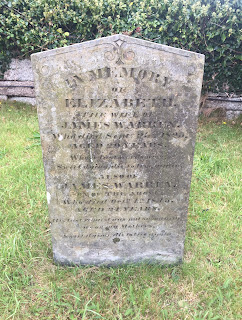 An excellent local historian called Andrew Michael Burt has provided fascinating and very clear information about the church, the bulk of which, as it stands now, dates from the 14th century. However, on the site as far back as the 5th century some form of place of worship has existed, as shown by the Selus memorial stone, commemorating St Just's brother Selevan: 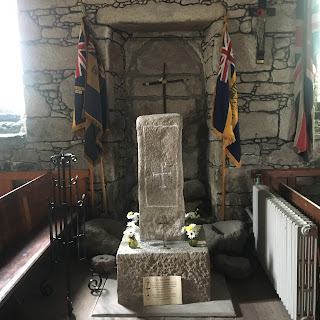 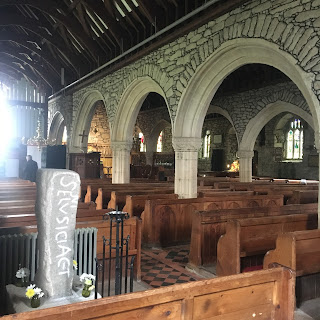 Burt explains that the parishioners of St Just were part of something I had no knowledge of before - an event that is topical in light of contemporary events in the Catholic church. This event is called, according to Burt, the Prayer Book Rebellion of 1549. At this time, the Cornish took up arms, outraged because the new Book of Common Prayer was written in English. They petitioned the King, saying that the new service was "like a Christmas game" and insisting, "We will have our old service of Mattins, Mass, Evensong and Procession as it was before. And so we as Cornish men (whereof certain of us understand no English) utterly refuse this new English". Burt explains that Cranmer had no understanding of the fact that from early times the bulk of the service had been in Latin but the Creed, Commandments and some other parts of the Liturgy had been celebrated in Cornish.
Burt also explains that the Puritans insisted on covering over all decorative elements and so it was only in 1865 that this fresco from the 15th century, called Christ of the Trades, was uncovered. It shows a wounded Christ blessing the tools of the various trades practised in the surrounding area: 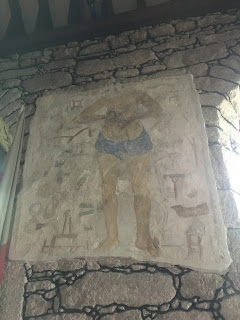 All the time one is in the church, one is conscious of a huge piece of drapery hanging against the wall of one of the naves. It turns out to be the white ensign flown by HMS Revenge during the Battle of Jutland in 1916. For me, there is always something of the mournfulness of a Wilfred Owen poem about huge old flags of battle, hanging, often tattered, in places of worship - I suppose I am thinking really of St George's Chapel, Ypres, one of the most poignant church interiors that I know: 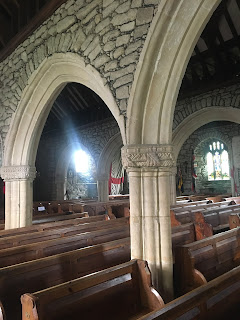 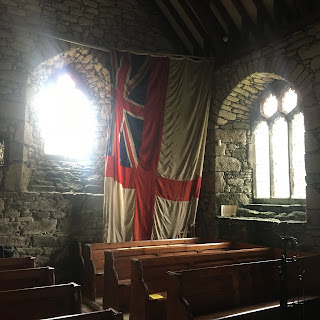 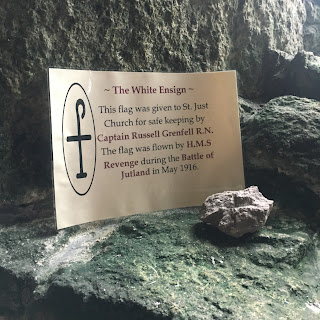 I don't know what used to be in the church's windows but they seem to be Victorian and post-world war 1. I am fond of stained glass from this period and I am always puzzled about why we have lost the skill to produce such work now. Today's figurative sculpture and stained glass both seem immensely clumsy compared to that made as recently as one hundred years ago: 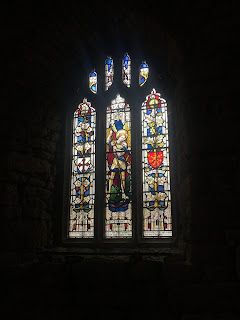 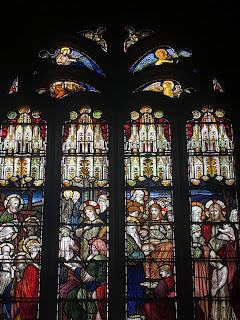 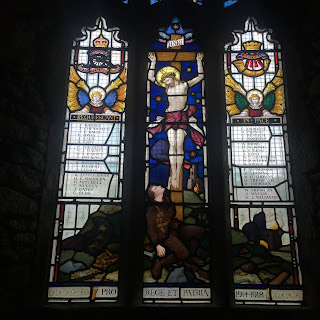 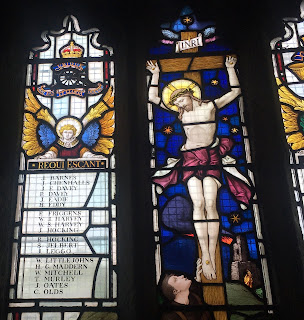 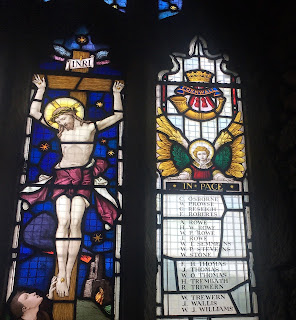 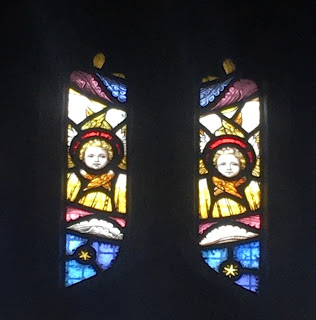 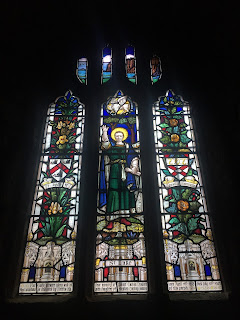 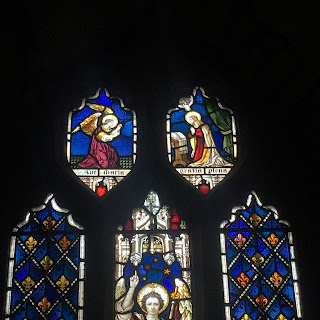 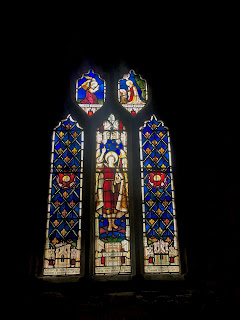 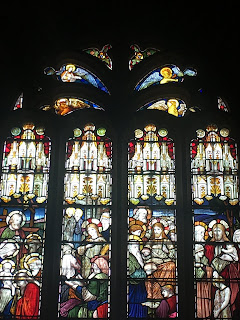 Given my heritage, I was surprised as I left St Just to realise that Bendigo in Australia is St Just's twin: 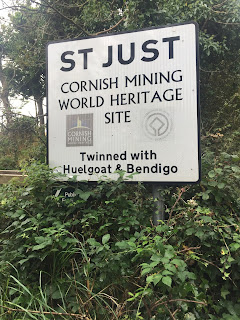 I was also intrigued to see, in what seemed to be an entirely white area, a lone outpost of the organisation Black Lives Matter: 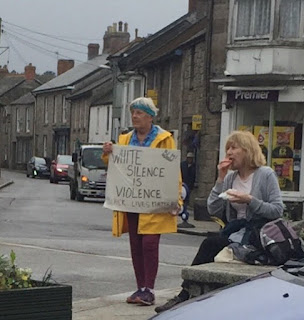 She spends each Wednesday in the central square of St Just apparently. I hope that cup of coffee is Fair Trade: 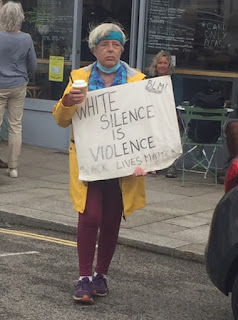 In these strange times, I find a place like the church at St Just a refuge of calm, continuity and, of course, Christianity, without which I fear our civilisation will soon cease to exist. 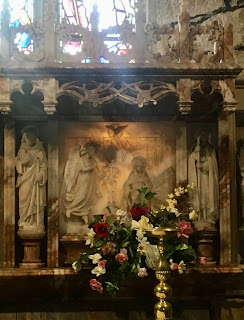 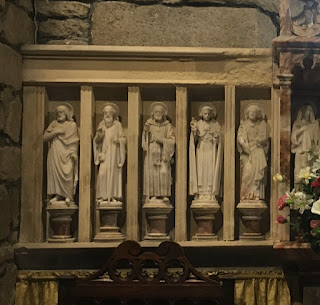 I was surprised to see a flock of sheep beside the church marked not in the usual one shade but rather in rainbow colours. I suppose the farmer simply wants a bit of gaiety in his fields; or possibly he (or she) is unusually loyal to the alternative religion of Britain; that is, the NHS: 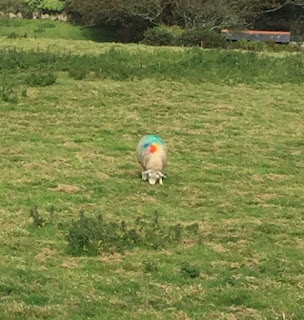