The Silence of the Trams 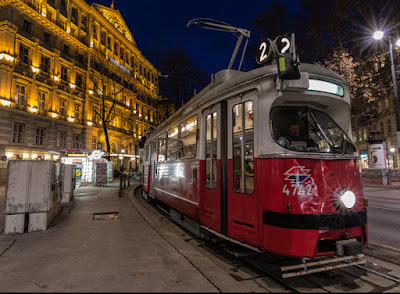 Many years ago, the ambassador of a nation whose vehicles drive on the opposite side of the road to those in Europe, looked left instead of right as he crossed Vienna's Ringstrasse and was, consequently, run over by a tram. As trams are almost silent, he had no idea that one was approaching. So that was the end of him.

That would be the conclusion you might reach if your assessment of risk was of the kind that seems to be animating governments worldwide in their approach to the new coronavirus and its ever-increasing number of variants.

My view is that that assessment is hysterical and far too extreme.  We have ruined existence for countless people with excessively harsh regulations, when we might have taken more moderate measures in the face of the real but limited danger the virus poses.

I acknowledge, with shame, that I didn't always think like this. At first I was crazed with panic, convinced that we all needed to be forced into our homes to cower for months and months on end, obeying our elected representatives' edicts and feeling outraged by those who didn't toe the line.

But my views have evolved as I've learned more about what the danger is that we are actually facing, and I have now changed my mind. I am not at the point where I think the virus doesn't exist - I know it does: I have friends and relatives who have suffered from it, some still unable to taste or smell some weeks or months afterwards. People in my neighbourhood have died. Despite these things, I no longer think the level of dismantlement of normal society that we continue to endure is justifiable.

I'm glad in a way that I was so mistaken to begin with, because realising what a twit I was has led me to think about risk. And I've realised that assessment of risk is also important in looking at another issue that is exercising many people nowadays in almost precisely the same way that I was exercised in the early days of the new coronavirus's appearance. That issue is variously called "climate change" or "global warming".

Once again, just as I don't deny that the new virus is very nasty at its worst, I also don't deny that the climate is changing or that the globe is warming. However, I do question whether the many measures being proposed by authority are the correct reaction to the degree of risk we face. As with lockdowns, I also wonder whether the various new prohibitions on all sorts of day-to-day things will be useful or effective, or whether they might cause unforeseen, wide-spread damage instead.

In thinking about how to approach these two issues - coronavirus and climate change/global warming - it strikes me that the risks they pose and the responses to them that we need to fashion actually run in parallel, (like tramlines, one might say, if keen to inject a vague sense of cohesion into a rambling blogpost). Climate change/global warming and the new coronavirus are each here to stay. In dealing with each of them, we have to first accept their presence, rather than fighting to eradicate them entirely, and then learn to adapt.

The whole long drama of the virus and the response by various authorities to it has made me understand finally the blindingly obvious: things are constantly changing and life sweeps us onwards, full of endless risk. As to trams and the cities where they operate, my policy is to always look both left and right.