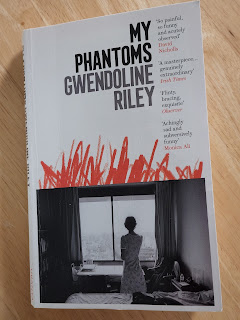 The relationship of a mother and a daughter can be one of the closest and most loving of all bonds, but when it goes wrong it seems often to be among the most toxic relationships of all. If a girl feels unloved by her mother or in competition with her or simply ignored by her, if a mother makes her daughter feel she is failing as a female or if she tries to reverse the roles, asking the daughter to become her protector and carer, things can go deeply wrong.

My Phantoms by Gwendoline Riley is the account of a daughter's relationship with a mother who she cannot really stand. There isn't a plot, just puzzlement as the first person narrator, Bridget, relates her unchanging frustration in the face of her mother's failure to be happy and records her attempts to deal with the older woman, whose name is Hen.

Hen tries to find happiness through joining clubs but finds herself disappointed. "I just looked round the table and thought, 'No'", she tells her daughter about one such attempt. She marries twice and although both marriages end in failure, continues to invest most of her hope in the idea that a man will rescue her - "Someone like Castle," she says, (Castle is a character in a TV show she likes), "Someone to, you know, have badinage with." She tries travelling and thinks perhaps she has found someone. Bridget asks him to dinner and her mother, on the evening in question, waits with the impatient excitement of a small child. Bridget watches her as she waits at the window. "Strange little silhouette. Awful animal attention", she observes.

Hen seems content when her daughter pretends her own social life is boring, as if her daughter's happiness, rather than making her mother happy, would only reinforce her own failure.  Hen has one friend, a gay man called Griff, who she doesn't like very much. All the same, she thinks she wants more friends. "I'm not sure what she would have done with friends", her daughter comments about this aspiration, "I suppose it had just lodged in her mind that one should have them; that it was 'what people did.'
If Bridget's account of her mother is truthful, Hen bases her ideas of how her life should be on fiction, making huge decisions such as choosing a place to live on the illusion that she will be given the key to a new world, one she has glimpsed on the television screen. Just as she hopes she will meet a "Castle", so she chooses her flat in Manchester because she imagines a life that, as Bridget exclaims when Hen describes it to her, is "like a Friends fantasy."

There is a yearning Bridget senses in Hen that makes her feel, when talking to her mother, that she isn't really being listened to - or at least that there is a barrier to communication, a mutual incomprehension between them, as if "what I said was being scrabbled through for some currency quite other than meaning or information: rather for the glitter of that old magic coin, the token she could hold tightly and exchange for entry, for a real welcome, into her imagined other place".

For years, Bridget avoids letting her mother meet her boyfriend. When her mother asks her about this, Bridget tells the reader, "We both knew she placed no value on the quality or substance of any encounter" Is this fair? Does Hen know any such thing? This is the difficulty with first person narrative - the reader's perspective is limited to that of the narrator. Who is Bridget? Is she reliable? Is she fair?

Possibly Hen is one of those unfortunate people who, without evoking out-and-out hatred in anyone, does evoke fairly universal irritation. Perhaps she belongs to the sad tribe of people who are mildly annoying, slightly needy and rather dull.  But, if so, why does Bridget feel so little genuine pity for her, why is she relentless in the face of pathos? When her mother tells her she is miserable, Bridget delivers a lecture that is certainly rational but seems to me cruel in its honesty, correct but brutal:

"'Are you listening, Mum?'" she asks, adding, "'Can I tell you what I think? You need to think about what you want. And why what you get seems to leave you so empty. This comes up a lot with you, this note of disappointed expectation. I think you feel like a bargain has been broken when you say you do what you're supposed to do. You understand that a deal was never struck, don't you?'

'And you ought to think about why you need to be distracted so much. With loud TV and outings, and daft crushes. I understand that they are the stuff of life, that they are ways to get through life. But they seem to leave you so empty.'"

Perhaps the real problem for Bridget is that she blames her mother for not protecting her or her sister Michelle from their father, who is the one truly vivid character in the book. He is a horrible man, a bully, cruel, unpleasant, thoughtless  and deliberately nasty to his children, but when he appears in the book, suddenly everything is alight and alive.

Bridget explains that when she and her sister are with him:

"What Michelle and I - and whichever other of his relatives was about - had to do was be there and be subject to him; we had to not be doing anything else. I'd call that a fit-up job, wouldn't you? And hence that dreadful fixed feeling: that for all that was apparently required of you, you could just as well have been a mannequin. Except, of course, you couldn't.  A living witness was required for the attitudes of this self-pollinating entity. A living listener was required - and you were it - even as the 'living' element was summarily disregarded. Nobody ever said anything back. Not once. There were no quibbles, no queries."

When he tries to embarrass them or crush them, Bridget says that she and her sister "did what our instinct told us to do in such moments, which was to sort of fade out of the moment," adding, "His company was something to be weathered, that was all."

Although Bridget alleges that her mother "did not give real advice, ever, about anything", Hen does in fact give Bridget and Michelle one very solid piece of advice. She advises them never to provoke their father. This seems wise, but if Bridget somewhere deep within herself believes her mother ought not to have allowed her children near the man, then perhaps it seems inadequate - or worse - to her. She also alleges that her mother found some excitement in the situation with the children's father and during her marriage almost certainly enjoyed deliberately provoking the man. Since the marriage ended when Bridget was two, she cannot be basing this on anything but bitterness.

But why is her bitterness directed at her mother, rather than her father? Is it a positive, an indication that she still cares about her relationship with her mother, while she has long since given up on her dad? I don't know but I do suspect the father is key to everything in the narrator's relationship both with her mother and also with her sister (inasmuch as she has one with Michelle - there is no explanation of why but the communication between the two women appears to be almost non-existent and it is Michelle who bears the brunt of responsibility for their mother, although Bridget doesn't appear to appreciate or acknowledge this.)

Bridget is a curiously muted character, without obvious aspirations, content with a small life, sheltering quietly in a small flat with her boyfriend - an analyst who, when he does finally meet Hen, declares "She's clearly frightened of engaging" - together with their rescue cat. When the boyfriend makes his diagnosis of Bridget's mother, I couldn't help thinking, " Is that not also true of Bridget?" Did the trick she learned in childhood, the ability to "fade out of the moment" become a permanent self-protective state?

And if so, if Bridget, Michelle and Hen all got into this fading habit, are they then the phantoms of the title? Or is the problem more complex? Is Bridget, in fact, very like her father, capable of being nasty in the same way he was? Certainly, toward the end of the book when she sits with her ill mother, she seems to enjoy deliberately provoking Hen, just as her father enjoyed provoking others. "'Are you bored with my company?' I said, brightly [to Hen]. Luring her on."

I don't know whether Gwendoline Riley artfully sets these questions, knowing the answers, or whether the book is mainly an effort on her part to disentangle the threads of her own experience, in the hope of making sense of what happened and understanding the ghosts that haunt her, most especially the ghost of her mother. Either way, what the book conveys brilliantly is how complex and mysterious family bonds can be. And when Bridget asks herself, following her last encounter with her mother "why was I thinking about getting anything out of her?" I would answer, "Because she forgot to give you a mother's all embracing, unconditional love."