A Taste of Money

Viktor Orban had a meeting with Donald Trump the other day. I don't have the kind of mind that can get terribly interested in why the meeting took place or what was discussed, but I do find the photograph that resulted fascinating. 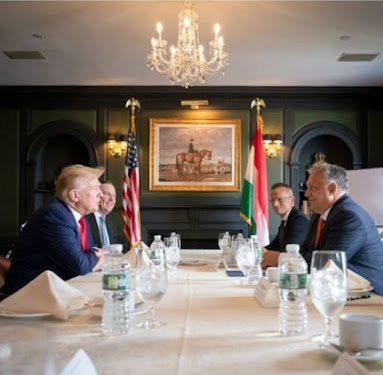 The first thing I wanted to know when I saw the photograph was where it was taken. It turns out it was taken in this place, a golf club owned by Donald Trump, (entry fee deposit USD350,000). The main clubhouse may aspire to look older but it was only built in 1939. The other buildings clustered around the swimming pool, (supposedly cottages belonging to members of the Trump family) have the hollow look of the buildings you see in outlet shopping centres 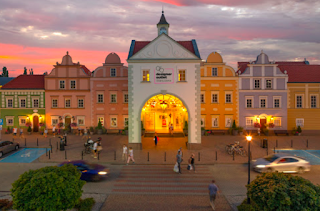 But what a strange room that meeting room is. The decorative style is some kind of vague apeing of a stately home - but the ceiling is exceptionally low, and, worse still, it is dotted with vents.
No matter, someone seems to have decided, we'll bung up a shop-bought chandelier and no one will notice a thing. And who cares if chandeliers usually dangle from metres of chain. As any fule kno, even if the cord's only two inches long, a chandelier adds class.
Hunting scenes do too, obviously. Even if neither you nor anyone in your family has ever got on a horse, it definitely lifts the tone to have some horsey pictures scattered about the walls. If you distract guests with horses, they'll never notice that you couldn't be bothered to get out the crystal jugs and instead simply dumped plastic bottles all along the table in a very inelegant way.
And black - yeah, black's classy also. Go ahead, paint those alcoves black. Then they'll go with the fireplace and no one will wonder what on earth they are there for. What's that you say - they could have books on them? Yeah, no, whatever - I mean obviously you don't want books. Books are for losers. Just paint the damn things black and stick up some flags and voila, it's just like Downton Abbey. You say grace and favour, I say, how classy is British racing green?
Before Trump owned it, the place belonged to John DeLorean. Whether it was Trump or DeLorean who made the decorative choices we see displayed in the picture with Orban I do not know.
- August 06, 2022