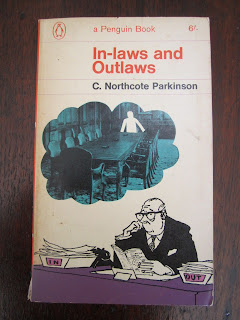 When I was in Budapest the other day, I saw my friend Mark Griffith. One of his latest enthusiasms was C Northcote-Parkinson, who, apparently, developed the theory that, wherever there is a large committee working on something, there will always be a much smaller group of people within the committee who are actually making all the decisions. All this Mark linked up to an argument about the American defence industrial complex and Eisenhower's deathbed last words, but I've forgotten how it went, if I ever really knew. Nevertheless, Northcote-Parkinson's name stayed in my mind so, when I saw this book for sale for $2.50, I bought it straightaway.

The book, it turns out, is intended as a guide to success, aimed not at the energetic, intelligent, painstaking and pleasant, who will not need it, but at those who are 'below average - stupid, idle, careless, uncooperative, ill-tempered and disloyal'. Northcote-Parkinson feels such people needs his advice for, 'after all, this is a democratic country. Why shouldn't [they] succeed like anyone else?' He also defines success in the 'material sense' and points out that 'all will end, if successful, at a desk.'

Northcote-Parkinson goes on to explain that he is assuming that his reader has already got as far as cheating in Intelligence Tests and dodging personality screening - 'all this is chilidishly easy, the tests being designed merely to exclude (and very rightly) those to whom even cheating is too much bother' - and, having got himself 'a desk of sorts', is now wondering what to do next.

The first thing Northcote-Parkinson recommends is that the reader provide himself with 'Background'. The book is clearly aimed at the English market, so his prescription is as follows:

'For the first five years of your career you should spend the annual two-week holiday as follows: the first two near Eton, Winchester, or Rugby, the last three near Oxford, Cambridge, or University College ...Take with you, on one or two of the visits, some ambitious friend who has changed his name to Astor or Cholmondeley. Then begin, very lightly, to touch in the background with snapshot and indirect reference...On no account must you tell a lie. Nothing could be more wicked, or indeed more foolish. You should aim rather to build up atmosphere. When you say, "I did no rowing at Cambridge - I dare say I worked too hard" you will be telling the truth. When you refer to your friend, Archie Cholmondeley, and add, "We were at Eton together," you will be strictly accurate.'

If this is not absurd enough, he then suggests that you should go travelling to a remote place and write some kind of a book about your experiences, in order to give yourself added colour:

'Make an early decision as to whether there should or should not be tigers. As you are not a big-game hunter, you can well do without them. If, however, you think one essential, a good plan is to ... take a stuffed tiger's paw with [you]... for making tracks in the mud. This is a perfectly sound scheme, for only a trained zoologist will notice that your tracks are all made with the near hind paw: and no zoologist is likely to read your sort of book.'

Your linguistic ability, it is pointed out, should be attested to by 'a series of modest disclaimers ..."Any smattering I may have of Urdu was severely tested that day"'. You should also follow up 'a frank confession of ignorance by a scene from which your conversational fluency can be readily inferred.' More importantly, Northcote-Parkinson advises, 'Always bear your scholarship lightly, as a foible, of which you are half-ashamed'.

The earnest tone combined with the dottiness of the advice continues into the next section where Northcote-Parkinson reveals that, while having established a background for yourself will give you a considerable advantage, it is not enough to guarantee success:

'Your main difficulty', he points out, 'as you will by now have discovered, is not in forming the right judgement but in reaching a first position in which judgement is required.'

To resolve this, apparently, it is necessary to marry well. 'The fact for a rising man to grasp is that your father is given you and there is little you can do about it; but your father-in-law you can choose.' Northcote-Parkinson then lays out a ridiculous plan of action, which begins with the solemn drawing up of a list of possible fathers-in-law, bearing in mind that it  'must be confined to men who have daughters.'

The next important part of the strategy is subtlety. 'To charge up to the Earl and say "I want to marry one of your daughters" would be a tactical error', Northcote-Parkinson confides. Instead, you must do complex research into the family you decide to target, compiling a card index of near relatives, based on what you find out - 'their names, whereabouts; their special interests; and whether they are on speaking terms with the family concerned.'

He provides a sample of the kind of thing he has in mind: 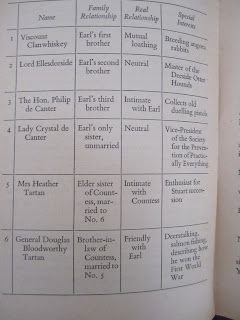 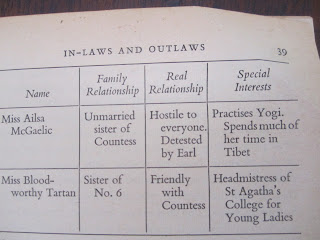 and goes on to explain how to use it. 'Let us suppose', he writes, ''that it is the Earl you chiefly have to conciliate. The possiblities between which you have to choose appear to be these:
1. You can write an article to prove that the breeding of angora rabbits is a vice beside which the crimes of Nero fade into insignificance.
2. You can find an unusual pair of duelling pistols and ask No. 3 to identify them.
3. You can join the Jacobite Society and ingratiate yourself with No. 5
4. You can write to No. 6 and ask his opinion as to how the First World War was won.
5. You can allege that No. 7 has never been to Tibet, or
6. You can lecture to the College for Young Ladies of which No. 8 is the Headmistress.
There is nothing to prevent you trying all these approaches simultaneously. The artistic touch would be to lecture to the Young Ladies' College on Old Firearms, ensuring that Nos 3,5,6 and 7 are present. Use the rare duelling pistols to illustrate the lecture, with an angora rabbit as the target. Kill the rabbit with the first shot and wound Aunt Ailsa accidentally with the second. End the lecture by pointing out that the Stuart kings never bred angora rabbits and that World War I was nearly lost by the kind of people who do, but won at the eleventh hour by people with experience of deerstalking. If you are not invited to Clanwhiskey Castle after that, it will be clear to you that the family is not worth bothering about.'

The book continues in a similar vein, although, sadly, it becomes rather wiser and less silly as it approaches the more familiar world of committees and office life in later chapters. All the same, Northcote-Parkinson is a witty companion throughout, and the illustrations by Osbert Lancaster only add to the book's humour.
- August 12, 2011

Email ThisBlogThis!Share to TwitterShare to FacebookShare to Pinterest
Labels: Books