Late to the Party

In my first year at university I didn't meet any feminists. Presumably people were being feminists somewhere - after all, The Female Eunuch had been out for some years by that time. In Canberra though, at least in first year Russian and English Literature, (Piers Plowman and the Medieval English Lyric), Unit 1B, it still hadn't occurred to anyone that it was time to revolt against, (or from? - bloody prepositions, the bane of language learners everywhere), the patriarchal yoke.


By the beginning of my second year the situation had utterly changed. A new breed of female had appeared on campus. They spent a lot of time at the Union bar or in the refectory, feet up on the tables, laughing loudly, happy in their own, male-free company. Many looked, at first glance, more thickset than your average Sheila, but labourer's overalls and lace-up boots is a uniform that makes even sylphs look like bruisers. Some had intensified the peculiar impression their costume created by shaving the hair off their heads; almost all had grown - or were in the process of growing - the hair they'd once shaved on their legs and under their arms.

I thought they were mad. I had no money and a cupboard full of flowery Indian-cotton dresses, (all smelling faintly of patchouli oil). I wasn't going to chuck the whole lot out and reinvest in King Gee's and lace-up boots. I couldn't afford to. At least, that was my story. Those clever overall wearers, of course, saw through it. In tutorials, they cast scornful glances in my direction. They could tell it wasn't money that prevented me from crossing the sartorial rubicon. They understood as well as I did that economic necessity wasn't what stopped me getting rid of all my pretty frocks. No, the truth was I was still in the grip of an appalling, unreconstructed impulse that made me want boys, (ugh, gag, wash your  mouth out, disgusting), to like me and think I was pretty.

The shame. And given my early experiences with boys, (see pic below - and, yes, that is my wigwam and my tomahawk, and no, I don't know which parent thought it was more important to photograph my distress than to do something about it, but I think I deserve compensation from all concerned), I really ought to have known better. I can only assume I was suffering from the compulsion Freud describes where you keep going back to a bad experience and repeating it, in the hope it will eventually come out as you want it to. 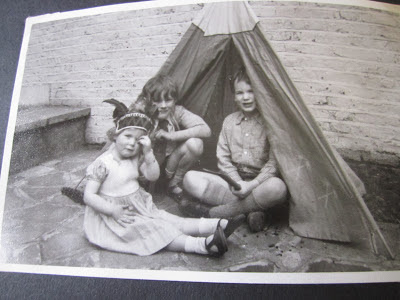 Or possibly it was just that from earliest youth I'd thought my dad was marvellous and therefore assumed that all his kind must be as well: 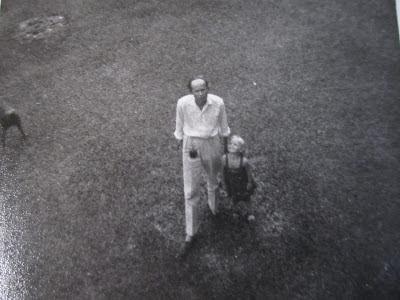 Actually, there were other, less flippant reasons that made me resist the blandishments of feminism. If I'm honest, my reluctance to join the movement had little to do with my fondness for men. The sticking point for me was mainly concern about the movement's aims and intentions. I feared that, like many of the political developments of the twentieth century, feminism's main driving force was not sober reason but anger. My radical friends were merely caught up in a reaction. Their aim was the destruction of existing structures, rather than the construction of positive change.

I had no doubt that within the existing social edifice women were treated as second class. That was not where my argument lay. What bothered me was that, while I could see that there was definitely an appetite for smashing, I could not identify anywhere amongst the sisterhood a simultaneous desire to analyse why we'd arrived at the way things were. I thought it important to know, first of all, why the system had been constructed in the way it had been. I thought we should find out what the underlying problems were that the current status quo had tried - however unsuccessfully - to provide solutions for. Only when we'd worked that out, I reasoned, would we be able to produce better solutions ourselves.

Things weren't thought through. That's what put me off. The movement arose from the kind of emoting that Susan Brownmiller describes in her 'Memoir of a Revolution':

"If the anger of enough people has reached the boiling point, the exploding passion can ignite a societal transformation"

I suppose I am fundamentally very English - as such, my instinct always tells me that anger and explosive passion are destructive and not creative impulses.

Most importantly for me though, the central conundrum of women's lives - how to combine achieving things using your talents and intelligence with the bearing of children - was not adequately addressed by bringing things to boiling point and breaking everything up. As Sheila Rowbotham states in the BBC documentary, Libbers:

'We didn't think through quite how else you bring up children.'

One approach, of course - possibly that of Susan Brownmiller, who, according to the Libbers programme, had three abortions - was not bringing up children at all. In this context, abortion became a liberating tool. This was another hurdle between me and feminism, and remains so.  Of course, I wholeheartedly believe in the importance of abortion being free, safe and available, but I do not - and will never - regard abortion as in any way liberating. On the contrary, I believe that a woman's need for abortion is almost always emblematic of her continued dominance by masculine forces, since it is only in a world shaped by long centuries of male authority that having a baby causes problems.

An abortion is usually sought because a) the other part of the making-a-baby-equation has not taken up his burden of responsibility in the issue and is not routinely expected to and b) bringing a child into the world and looking after it thereafter makes doing anything else immensely difficult, because things are structured in a manner inimical to women. The obstacles that are placed in the way of mothers who want to be other things as well ought to be the things that feminism aims to remove.

Thus, to my mind, believing that abortions are liberating is deluded. If we were truly liberated, abortions would not be something we'd need. Instead of fighting for the right to abortion, I believed that we should have been fighting for an obstacle-free path through the world and the workplace for mothers. Once we achieved that, I reasoned, we would be truly liberated. By fighting to be freed not from man-made obstacles but from our own children, we were accepting a set up made by men.

Now I know better. At last, I've understood how madly idealistic I was. I recognise that I was wrong and all those women who chose the path of least resistance and fought for abortions understood what was actually possible and what was not.

Watching the outraged reaction to the proposal by Australia's opposition leader to levy Australia's largest companies, in order to ensure paid parental leave is paid at a woman's actual salary for six months after the birth of each of her children, I have learned that I was simply utterly naive.The reaction to the proposal from men of all colours - apart from the instigator of the scheme himself - has proved to me that most men couldn't care less about women, (or children).

Sure, over the years men have been forced to accept us as we've begun infiltrating their workplaces. Grudgingly they've allowed us to work alongside them - but only provided we do it on their terms.

The abuse that has been heaped on the proposed scheme - which seeks to very slightly adjust the terms of work towards the needs of women, (and children - and need I go into the uncosted health benefits arising from the babies concerned being breastfed for longer and the women concerned being able to breastfeed for longer, not to mention the importance of making it easier for people to have children, in a country where house prices et cetera work against childbearing), is evidence that Australia's male leaders are utterly unenlightened about women's biological dilemma. Therefore, I have finally become a feminist, having too late - and very sadly - recognised that few men give a stuff about what happens to me and the rest of my sex.
- June 04, 2013