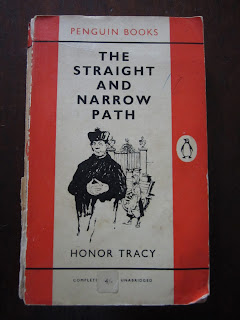 Having been disappointed by contemporary literature once or twice recently (although not always), I've started reading old Penguins - only the ones printed before they brought in big writing on the front and shiny covers - instead. Which is why, on the way to Sydney the other day, I popped in (this is beginning to sound like something from Round the Horne and Julian and Sandy, but it isn't) to the Georgian house facing the railway station in Goulburn, where they sell old books. The room that I think may once have been the old dining-room is now devoted almost exclusively to Penguins. Indeed, since my last visit, the Penguins have been multiplying - there are now so many in there that they have escaped the shelves and sit about on the floor in teetering alphabetical stacks.

I eased the overcrowding by buying four or five of the things and I've just finished reading the first of that batch. It's by someone called Honor Tracy, a writer I thought at the time that I'd never heard of. Now though I've realised that she was the woman - either under her pen name or her real name, (which was Lilbush Wingfield) - who was supposed to have been the recipient of a love letter from John Betjeman, which later turned out to be Bevis Hillier's idea of a joke (the first letters of each sentence were an acrostic, spelling out the phrase, 'AN Wilson is a shit' - oh how we laughed, the wit, the rapier-like wit, of the man).

Anyway, Tracy, I now know, wrote lots of things and was quite celebrated in her day. In fact, according to the New York Times, her work was described in a 1972 book called Contemporary Novelists as 'designed to be read with a glass of sherry in one hand'. Sadly, I didn't discover this until after I'd finished the one I bought, which is called The Straight and Narrow Path. Still, even without the sherry, it was very entertaining - indeed, I've just learned (thank you, Mr Google) that it was named 'Farce of the Year' by Time magazine in 1956.

The book is set in Ireland and concerns a libel case brought by the Canon of a country parish against a visiting English academic. I have to confess that to begin with I wondered if Tracy was being entirely fair to the Irish. At first it did seem to me, in my hopelessly politically correct way, that she might be balancing on the very edge of racism in her portrayal of her Irish characters largely as 'colourful rogues'. However, I was reassured a little when I found out that the plot of the book pretty much exactly mirrors something that actually happened to Tracy. Presumably, therefore, she wrote from experience rather than prejudice, I reasoned. I also gradually came to realise that she had a genuine affection for and understanding of the Irish and was implying that they go about things differently from the English, rather than less efficiently.

And even if Tracy were less than entirely tolerant, in the end I'm not sure it would have mattered all that much. This is because she is very funny. Her portrait of village postal arrangements, her depiction of a dinner at a decaying old house, the vision she gives us of ruby cufflinks being pressed into a sponging Englishman's hand - it 'closed on them like a sprung trap while its owner repeated over and over that it was a shame to rob him and oh, he simply couldn't' - these are just a few of the many things in the book that made me laugh. I would like to quote them all, but I will restrict myself to my favourite - her description of a man who has just made his confession as  'much restored ... looking about him with the alert, refreshed air of a baby who has just been sick in someone's lap.'

By the closing pages, as well as a great deal of amusement, an interesting portrait of rural Ireland and its ways emerges from the book - it is a world in which the Catholic church could not be said to be an entirely positive influence. I'm sure the novel must still be available on Abebooks (some soiling to frontispiece but otherwise in fair to good condition) and I recommend it to anyone who wants an entertaining read.
- January 24, 2011