The time immediately after leaving university is usually
a peculiar one. Emerging into the world of jobs - or the lack of them - comes as a fairly unpleasant shock. I, after a brief and miserable stint as a graduate civil servant - from which I was rescued by my brother pointing out that there was no law stopping me leaving (not sure how I'd missed that crucial point) - chose the undemanding route of a 3-month course in typing and shorthand. My best friend meanwhile became something in the planning section at Kensington Town Hall.

My course took place in an old building on Kensington High Street, which meant I was close enough to go up to the Town Hall to meet my friend for lunch.One day when I went up to meet her for this purpose, I found her dealing with a typical Chelsea and Kensington ratepayer. He wore a camel coat like Toby Mears in Callan and, while physically resembling Wilfrid Hyde-White in My Fair Lady, he had the demeanour of Henry Higgins on a particular irritable day.

He had clearly come ready for an argument, convinced that whoever he would deal with would be an obstructive fool. When my friend was able to answer all his questions and help with everything he wanted help with, he was momentarily crestfallen.  'You seem to know your stuff,' he told her, grudgingly. He gathered his things together and got up from his chair. Then a thought struck him. He leaned across the counter and fixed  my friend with a beady gaze. 'All the same,' he said, 'I bet you know nothing about naval medals.' With that he swept from the room.

Apparently this year's winning essay in the English faculty at Cambridge University was on the subject of the pocket in the work of Henry Fielding. Walking on Mount Ainslie after being told this odd piece of information, I too had a Toby Mears/Wilfrid Hyde-White/Henry Higgins moment when I saw this creature: 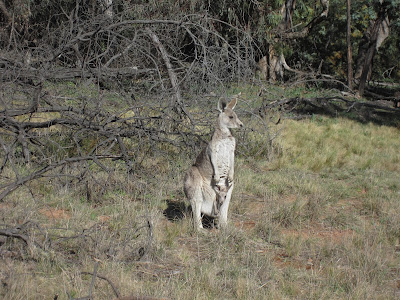 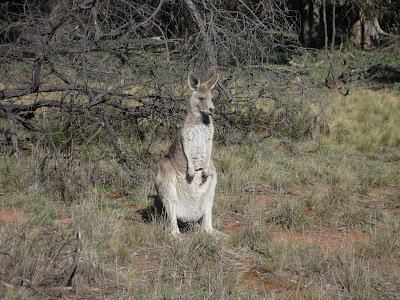 'How's that for a pocket?' I thought, 'Now you see the baby - now you don't (and who knows, there might even be some specially interesting naval medals hidden down the bottom).'

'Beat that, Henry Fielding,' I continued, idiotically, 'I bet there isn't a pocket as good as that one anywhere in your entire oeuvre.'