Letting the Jeans Out of the Bottle

When I'm in London I sometimes stay in a club which has
a reciprocal arrangement with a club I belong to in Australia. It - the London place - is extremely comfortable and has considerable aspirations to grandeur. As one of my daughters pointed out, its members would get a bit of a shock if they ever decided to take up their reciprocal rights at the place I belong to over here. My club has no complicated procedures for becoming a member, beyond the payment of a (very small) fee. Its clubhouse could not be called elegant, unless your idea of elegance involves poker machines.

The people in the club in London have probably never even heard of poker machines. One has the sense that they are battling to exclude the modern world from their lives as much as possible. I get the impression that, after many long board meetings they have identified denim as the contagion that brings with it all that is worst in contemporary life. They appear to have convinced themselves that by excluding it in all its forms from the club's environs they will manage to keep the 21st century - and, indeed, the 20th century, which I'm not sure they've noticed has ended - at bay: 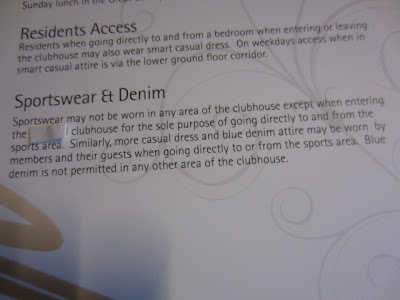 Email ThisBlogThis!Share to TwitterShare to FacebookShare to Pinterest
Labels: Britain